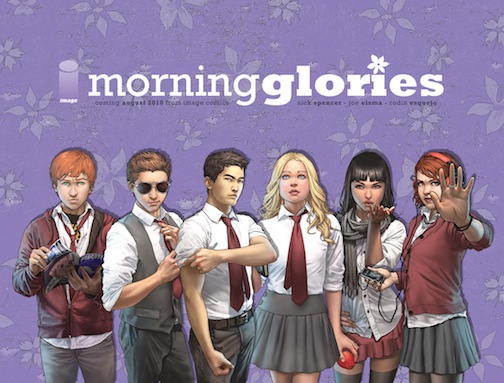 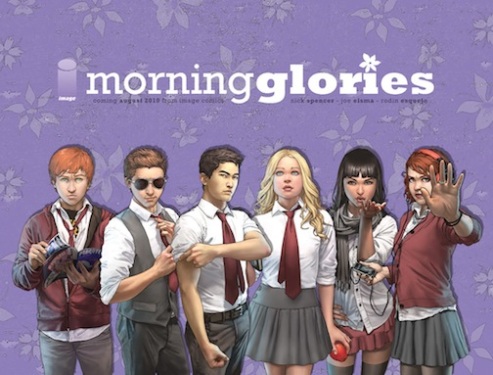 Creator Nick Spencer has been quoted describing this series as “The Runaways meets Lost” and I would agree, but I would take it a different direction. Imagine Judd Apatow’s Freaks and Geeks as written by Joss Whedon and you are even closer to home. MG is the perfect water cooler book (water coolers are still a thing right?) in that it invites the reader to conjure up countless theories as to precisely what the heck is going on in this book, and further, anyone who reads this series is absolutely dying to talk about it.

The story centers around six brilliant teens, each of whom are harboring a deep secret or twisted past, who are recruited to attend the prestigious Morning Glory Academy. They soon find out that the school itself has its own dark secrets. If you really want to know more than that, you have to read the book…or the Wikipedia page (but that wouldn’t be any fun, now would it?).

But there’s the rub with this book. I honestly CAN’T talk about it without ruining things for you. Should I mention the time travel? The term “time travel” really waters down what this book does with the fluidity of time and space. The religious symbolism? Dude, you thought the Blues Brothers were on a mission from God? They got nothing on these kids. What about the weird glowing kid in the basement? The magic dungeon room? The mysteries tend to pile up eventually, but in a good way. This is a definite read under any circumstances.

Classroom Rating: 9/10. First I have to say this title is for readers 14 and up. There are teens in dangerous situations, one of the kids is a bit of a ladies’ man…AAAAAAAANNNNDD he kind of is accused of murdering his dad? You still on board? Good. You should be. As far as readability goes, Morning Glories is pretty straight forward. There’s no scientific language like you might find in a capes and cowls book, but what you will find is a tightly woven narrative that manages to be gripping and realistic despite its surreal topics. There are a few issues, however, with the art. Even the seasoned comic reader could get a little lost with Eisma’s character designs. Sometimes it is difficult to tell who is who, but Spencer does such a good job with characterization, that you know a character the second they start speaking. There are six trade paperbacks out that collect around six issues apiece, and there are two mammoth hardcover editions that each have 12 issues in them.

What could you teach with Morning Glories? Characterization is the obvious choice here, but so is symbolism. I would even consider this title for literary elements like allusion and theme.

Highlights: At the end of each issue there is a short comic strip that boils down each issue to a kid-friendly, humorous summary. There are also discussions with a fictional professor who discusses his own theories about what he thinks might be happening at Morning Glory Academy.