Why was it challenged?: From CBLDF:

The inclusion of the compiled Watchmen in school library collections has been challenged by parents at least twice, according to the American Library Association’s Office for Intellectual Freedom. There is no media coverage of these challenges to be found online, but OIF helpfully provided us with a few more details from their database. The first Watchmen complaint, at a high school in Harrisonburg, Virginia, was reported in October of 2001. OIF removes specific identifying details from the information it releases to the public, but the high school library in Harrisonburg holds a copy of the book, so it appears the challenge was unsuccessful. The second challenge, from May of 2004, took place at a school serving grades 6-12 in Florida, but the city and outcome are unknown.

Ok…Watchmen. Let me be honest: there is nothing I can say about this book that hasn’t been said a million times, positive or negative. Moore and Gibbons are responsible for moving comics that much closer to respectability, and for that, a debt is owed to this book. So instead of a full review, I’m going to just say read it. Do not rely on any other source to tell you whether it’s appropriate or whether it’s worthwhile. Just read it.

Watchmen, and Moore for that matter, are the perfect candidates for Banned Books Week (Moore has three books on the challenged books list). There is a great interview with Moore over at The Comics Journal from 1987, where he addresses the debate about a comics rating system:

I know that there are a lot of parents that don’t agree, would not agree with me upon that, and of course they have the right, but as long as it’s kept upon a parental level, I’m not too worried. If parents are making the decisions that their children can or cannot read this sort of book in the home, that’s fair enough. The parents can take the consequences of that. It won’t necessarily stop the children reading it, but at least it’s a transaction between the child and the parent and it’s the parent taking responsibility for their children, which is fair enough. I take a more liberal stance in that I prefer to let my children read anything, but I want to know what they’re reading, and if there’s anything they come across which might be disturbing, then I’m always on hand to talk about it with them.”

That’s it. That’s all I got. There are far more talented people who have written ad nauseum about this book, so I’ll leave it up to them to debate the merits of Watchmen. Me? Classroom rating: 10/10. 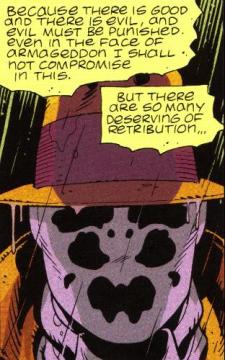