UPDATE:In the review I make reference to “hanky panky,” but I am not referring to a scene where rape is implied. If I am being honest, I forgot about that scene, but I do not want my readers to think that I am lessening the impact of that scene or minimizing its importance. A reader commented asking if I thought the rape scene in Pride of Baghdad was appropriate for readers as young as 13, and I still believe that the onus is on us as educators and parents to pre-read and make that judgement for ourselves. However, I stand by my initial age rating if only to encourage the teaching that can go along with the subject matter. 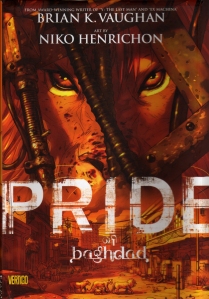 Why Is It Challenged?: According to CBLDF: Pride of Baghdad is frequently challenged for alleged sexually explicit content.

When I saw this on the list over at CBLDF i couldn’t wait to review it. I’ve wanted to read it for a while and this was the perfect opportunity. Pride of Baghdad is a story about four lions who escape from the Baghdad Zoo after it was destroyed during the Iraq War in 2003. The loosely-based-on-a-true-story comic imagines how the lions could have survived on the streets of Baghdad before they were shot by American soldiers.

Now, I promised myself that all of these Banned Book Week reviews would be snarkless, and I want to be sure that I don’t fail on that promise, but I have to admit that when I heard what this book was about, I could not imagine why it was challenged. Immediately I thought, “Are we going to ban zoos now? Nature shows?” However, I can’t call into question what parents want to protect their children from, and if the implication (yes, the aforementioned sexual content is off-page, and implied) of animal sex is not something you want your kids to experience, then more power to you. However, there is so much more to this book than the two or three panels where animals do the equivalant of family sitcom hanky-panky. Vaughan and Henrichon have created a great allegory about the casualties of war, without focusing on the obvious. Despite using animals, the creators tell a very human story about what freedom means, and the very human cost of war.

The four lions offer very different perspectives on these issues, and it gives the reader the rare opportunity to peak into a bit of political ideology, but the animals make it easier for us to relate to the ideas because they aren’t masked by our own predispositions. That’s a lot to get from what is essentially a mash-up of The Lion King and Black Hawk Down, but Vaughan and Henrichon accomplish this masterfully.

Good For Ages: 13 and up. At that age I would hope they understand the very basics of mating. Beyond that, there is some very realistic war imagery that younger kids might not be able to handle.

Classroom Rating: 8/10. This is a great book, and it would probably be great if paired with another book, but on its own Pride of Baghdad is a far too fast of a read to really dig into. That’s not to say it lacks substance. This book is layered beyond belief (just look at the title), but there just isn’t enough time for us to live with these characters for it to stand by itself. That being said, this is a great book that accomplishes a lot within its limitations.

What Could You Teach With There is an obvious social studies/history class connection for this book. It offers an interesting perspective on the Iraq War that makes it land a bit more convincingly than the average textbook. As far as the language arts classroom goes, Pride could be used to talk about allegory, symbolism, characterization, and pretty much any literary term you can think of. The creators were operating at a really high level here, and there is a lot to unpack in such a small package. 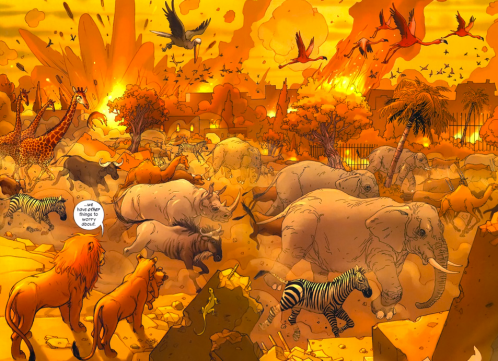 Highlights: The bombing of the zoo is particularly memorable. The chaos and the different animal reactions gives the book a really grounded feel. You should definitely check it out.