Why was it challenged/banned?: From CBLDF:

As with many critically-acclaimed books — particularly graphic novels — Fun Home soon drew the attention of would-be censors. In 2006, Louise Mills of Marshall, Missouri, requested that the book (and another graphic novel, Blanketsby Craig Thompson) be removed from the local public library. Mills characterized the books as “pornography” and expressed concern that children might be drawn to them because they looked like comic books. Another citizen who spoke at a library board meeting even contended that the books could result in “seedy people coming into the library and moving into our community.”

Where do we begin with Alison Bechdel? Oh, you mean MacArthur Foundation Genius Alison Bechdel? You mean she of “Bechdel Test” fame? Oh, that’s right, we’re talking about Alison “There’s A Pulitzer Nominated Musical Based on My Book” Bechdel. The thing about Fun Home is…it’s brilliant. There is something palpable and special about the way she tells this story, giving the reader an almost voyeuristic peak into her adolescence that is difficult to turn away from. Listen, the MacArthur Foundation doesn’t just throw the term genius around lightly, and neither do I; Fun Home is clear evidence of a genius at work. It feels cliché to invoke the names of Tennessee Williams, Flannery O’Connor, or Truman Capote here, but the tone and voice of Fun Home lends itself to those easy comparisons, if not somewhat unfairly.

But I would argue that it is fair. Bechdel’s memoir is definitely the kindred spirit to works like The Glass Menagerie, but it is unlike anything else, and it needs to be celebrated as such. The way Bechdel unspools her story, while simultaneously wrapping the reader up in it, is the best example of storytelling. Fun Home isn’t a tale shared over beers, or passively viewed while eating popcorn. Instead, Fun Home is a story shared among friends in a parlor after supper. Ties loosened, shoes kicked off and tea cooling, surrounded in Victorian grotesque and Greek drama.

Fun Home details, in labryinthine fashion, Bechdel’s childhood with a closeted homosexual father, her discovery of her own homosexuality, and the apparent suicide of her father at the age of 44. But that list of plot details doesn’t get to the core of this story: discovery is one thing, but the searching is entirely something else. This book deals with people who are searching for something. Searching within themselves or others, searching for answers, searching for connections and where their stories fit in with the big grand story we are all telling. I love this book. I cannot say that enough.

Good For Ages: 17 and up. I’ll use the MPAA’s (flawed, and somewhat bigoted, but appropriate here) rating age, because although there is no violence, there is definitely nudity and sexual acts present. This is an adult book, and I don’t think there is anything wrong with that. Since when did bookstores and libraries become the domain of children? Some things are more suitable for older readers, and Fun Home is definitely that.

Classroom Rating: 10/10. Now that I’ve gotten the age requirement out of the way, I have to say that this book is probably more at home as a college text, or for individual reading. As a novel, as a memoir, it is extremely powerful and worthwhile, but the visual nature of graphic novels works against it in this case, and you want to be sure that you are recommending this to mature readers. 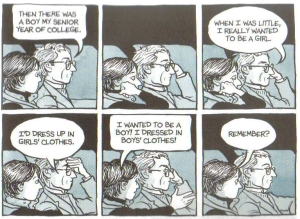 What Could You Teach With Fun Home?: The structure of Fun Home in reference to the author/protagonist’s story is just waiting to be explored. This is a great book to help students practice literary analysis, and even better, literary criticism. The term “new classic” was invented for books like Fun Home.

Highlights: My highlights were the actual laugh out loud moments Bechdel snuck in here. Her dad’s fastidious, but to the point parenting style made for a few genuinely funny moments. This is a definite must read.